The correct ratio of roosters to hens is 1:10 or so, but we have kept two roosters and four hens. As usual we are determined to learn from experience rather than rely on what literature tells us. I prefer Skana with his charcoal plumage, his dark Australorp eyes and his patient demeanour when I scoop him. These attributes allow me to ignore his ‘scream-a-doodle-doo’ crow.

Skana is beautiful, with his charcoal black feathers and brilliant red comb. He lacks a true tail and his crow is like a blood-curdling scream.

FM prefers Pingu with his iridescent green and purple plumage, gorgeous rooster tail and rare crowing but he is elusive and expertly avoids the daily scoop.

The sunlight brings out irridescent green and purple in Pingu’s feathers. His tail is superb!

Both boys get along with each other, having been raised together, but Skana is definitely the top cock. He roosts with the girls, grazes with the girls and has his pick of the girls. Pingu hangs out at the edge of the flock and occasionally tries to get in on the action but is quickly put in his place.

As a result, Pingu has taken a keen interest in the new chicks and has set his mind on establishing his own harem. Like a pedophile, he spends the days lurking around their fenced area, crowing and strutting for them. Eventually when we opened the fencing to allow the chicks a wider range, he was on them in a mating frenzy. The flying feathers and screeches of these two month old babies stressed all of us out as they were pursued beyond their enclosure and had trouble finding their way back.

It also puts strain on Skana. Upon hearing the panicked calls of the chicks, Skana runs from his flock to the chicks to Pingu, trying desperately to assess the danger and to discipline Pingu. As Pingu’s confidence grows, he has started edging in on Skana’s hens but does so in a sneaky and violent fashion.

Pingu is looking a little sneaky here. No doubt he is lurking near the baby chicks, waiting to terrify him with his manliness.

The hens are able to keep their eye on Skana’s macho moves and scoot out of reach when they choose to but they constantly blind-sided by Pingu’s ungentlemanly pounce. Let’s just say that everyone has lost a lot of feathers and every egg had been fertilized at least twice. Two of our hens, Tweedle Dee and Tweedle Dum, have gone into a hard moult and I truly believe that it is partially due to the stress of being constantly pursued.

And I haven’t even mentioned the crowing. The quiet Pingu has now found his voice and uses it as an answer to each of Skana’s calls. Oh… the endless crowing — it stresses out all 15 of us! 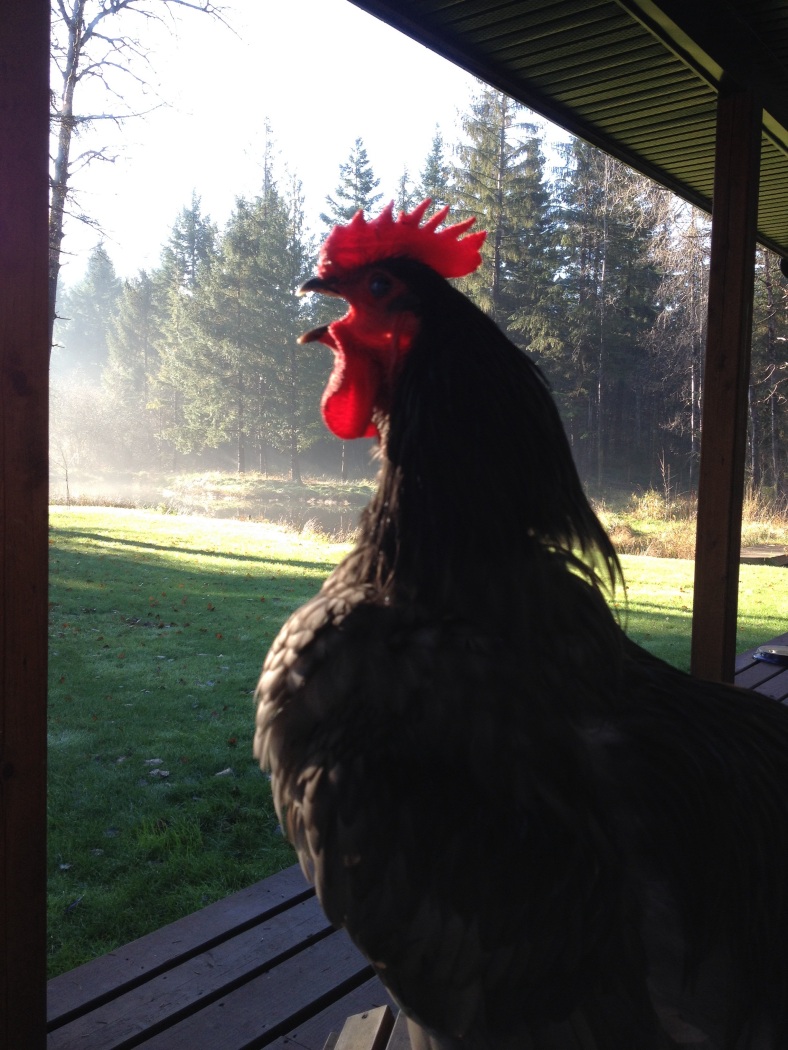 Skana’s morning crowing session – This looks so quaint and picturesque but, in reality, wine glasses within a kilometer radius were shattering!

And so, the fate of Pingu was decided at the young age of 5 months old. We killed him and processed him just as we had done with his two brothers a few months earlier. Pingu wasn’t a malicious guy at all. He was the right rooster in the wrong place. He was just a guy trying to make his mark and I’m sure he was well-intentioned. His downfall was his gender.

Here, as a three month old cockerel, Pingu was a shy beauty with lovely green/black feathers.

Sadly his sister, SunnySide will be the only one who mourns his passing.

Once again, Skana has been selected as top cock. Here he stands on the rooftop to celebrate. SunnySide is mildly impressed.

3 thoughts on “Two Many Roosters”