Just like any chicken-keeper with a backyard flock, medical issues come and go on a fairly regular basis. In the seven years that we have kept chickens, we have dealt with roundworm outbreaks, respiratory issues, impacted crop, bumblefoot, possible wry neck, eagle attack, internal laying and a few other unknown, undiagnosed problems. We have only taken a chicken to the vet once, figuring out all the other issues through ‘Dr. Google’ or common sense. We have lost a number of girls to medical problems over those years but we have also helped others survive and thrive.

Chickens are stoic in their pain and discomfort and, despite all my efforts at chicken whispering, they rarely tell me the root of their problems. It takes keen observation of their unique chicken-alities so that you can quickly notice a change in behaviour or physical wellness. The word on the street is that once a hen shows weakness, it is too late to help.

Benedict is our top hen despite her 6.5 years.

Me and Ben have a special bond. She comes to me most mornings for a snuggle, a chat and a game of beak (which she invented)

She is boss of the coop and boss of the Queendom. She is usually one of the first out in the morning and contentedly ignores our rooster to forage where she chooses. So, last week, when I found her sitting on the coop floor, it struck me as odd but I wrote it off as weather-related since we had 20 cm of fresh snow on the ground and it was still snowing. A day later, she was still sitting on the coop floor and again the following day.

Finally on day 3, I went to pick her up and was shocked to see that her foot was bright green at the base of the middle toe and that toe was dangling loosely. I carried her into the house where FM and I analysed it more carefully.

Strangest bruise I have ever seen, but apparently normal.

A quick internet search taught me that chicken bruises are bright green and typically show up 2 days after an injury. It appears that there is a break somewhere in her middle toe, probably the bone closest to the foot. I found a website which discussed helping wild birds (mostly songbirds) who have injured their wings, feet or legs. It suggested making a whole foot splint out of pipe-cleaners or popsicle sticks and vet wrap. Somewhere else, I found a suggestion to use a styrofoam meat tray as the splint.

With a bit of creative ingenuity and a very patient bird, I managed to cut a splint for the one toe out of a foam tray. I made it fit the whole base of her foot and extend the length of the injured toe, ending before her claw. I made sure the splint had smooth edges, and I wrapped it with gauze.

Her middle toe is about the same length as my finger. 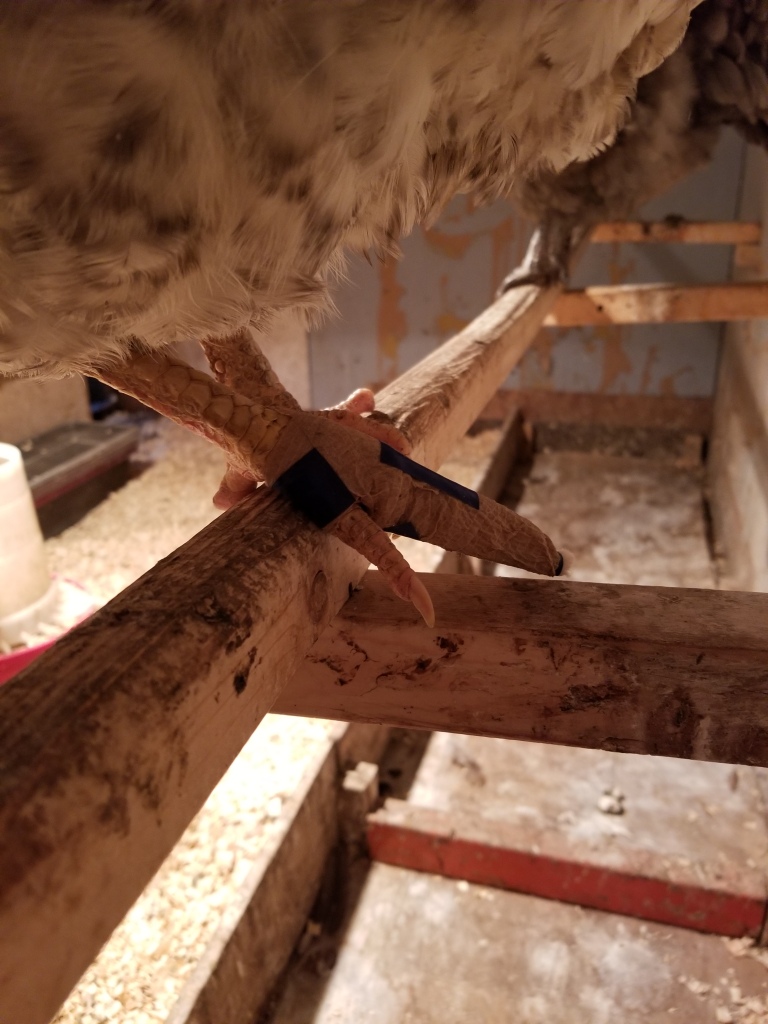 Here is the only photo I took of the splinting (one week later). Her middle toe is splinted straight but her three other toes are all able to flex and bend. She’s always flipping me the bird.

One week later, the splint is still on and in place. Benedict has not left the coop but has progressed from hopping on one foot to gently putting weight on her injured foot and limping from the food to the water and her favourite sleeping spots. Last night, she even hopped up onto a roost bar for the night! 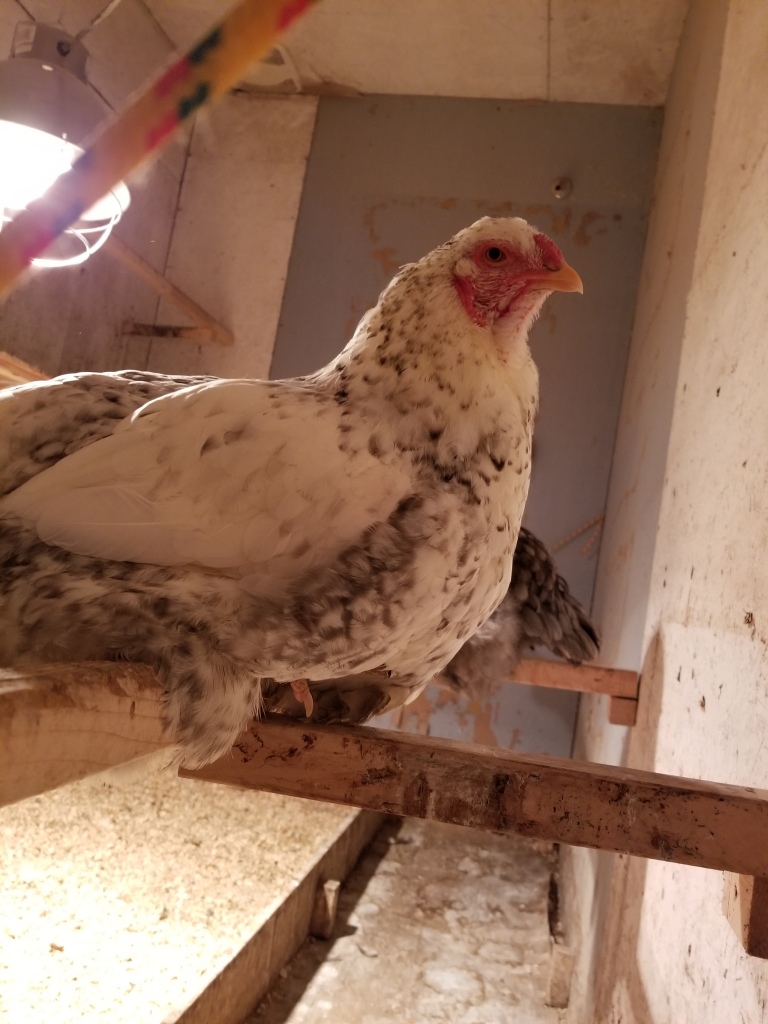 She has managed to get up and down from the roost over the past couple of days and is pretty adept at limping around the coop. I imagine it will be a solid three weeks before she free-ranges again.

Most forums I found suggest keeping an injured hen separate from the flock until she can fend for herself but I didn’t do this with Benedict. She doesn’t bear confinement well, calling and crying whenever left alone in the ICU dog crate, and would probably injure herself further in trying to escape. Also, since she is the Alpha, no one would dare mess with her. So far, this has proven true.

We still don’t know what could have broken her toe. Nothing in the coop was out of place – no signs of a struggle. Perhaps the ‘snow day’ caused some crazy cooped-up chicken antics in the coop. Their lips are sealed.

One thought on “DIY Vet – A Broken Toe”