Recipe For A Hen House

1 unused bathroom in the workshop outbuilding

1 handy FM to remove all plumbing from said bathroom

As I have said before, FM and I took on the role of chicken farmers without truly being prepared. Anyone can drive out to the poultry swap and pick up a few day-old chicks. But it takes real genius to stay one step ahead of their constant growth and need for space.

Here we are, 6 weeks into this chicken adventure, and a true sense of urgency is upon us. While still ramping up our run training and managing the spring growth around the acreage, we are also trying to get these chickies housed in their permanent home. Needless to say, our weekends and evenings are jam-packed.

A few months ago, our friend Simon suggested that we turn the rarely used workshop bathroom into the chicken coop. I believe that this one idea was the catalyst for the whole adventure.

“You have a full bathroom in your workshop?” I hear you asking. Yes, it is true. The previous owners/builders of our home lived in the workshop for the two years it took to build the main house. So, of course, it has a toilet, sink and shower. (I still have trouble coming to terms with this mad living arrangement whenever I look carefully at the workbench/kitchen counter.) On the up-side, it is well-insulated, has water and electricity, is near the main house and will hopefully be raccoon, rat and mink-proof.

So, now that we had decided on the design and structure, all we had to do was build it.

With its patchy, plywood walls and bare concrete floor, ‘rough’ would be a compliment.

View from the shower door out into the workshop.

Once the plumbing fixtures were removed, we covered and capped the various orifices and patched the walls that we damaged during demolition.

A 6′ x 9′ piece of linoleum trimmed with brown vinyl baseboard. 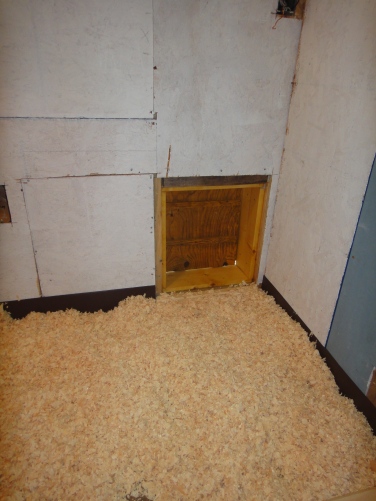 The chicken door is still under construction. That pinhole of light is large enough for a mouse and a mink might be enticed to enlarge it. The latch is outside at the top and the door flips down to become the entrance/exit ramp. 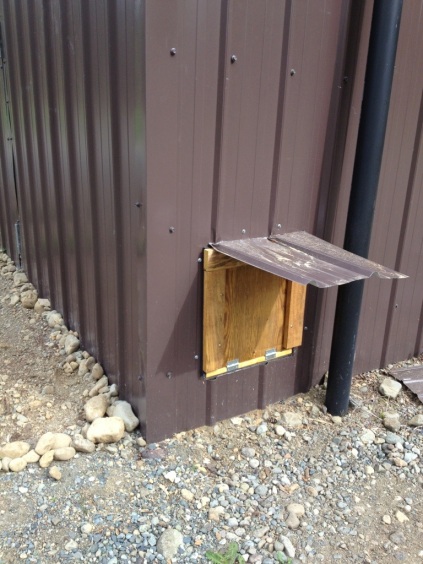 The wooden door will flip down and work as the ramp. We won’t be opening that door until we have proper fencing in place. They will have to tolerate a few more weeks of confinement before we allow them to range freely! 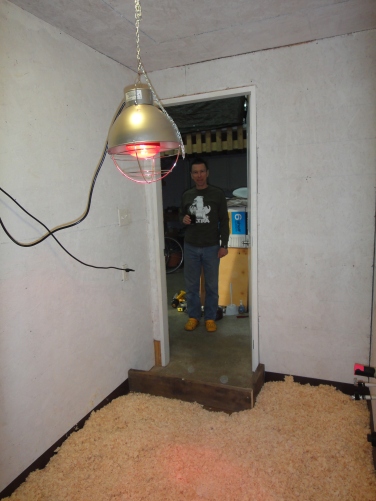 It is fabulous to have electricity so easily available for the heat lamp, since it is still frosty on these late April mornings. FM built a 2×6 door sill to prevent the shavings, etc. from entering the shop when we open the door.

This roost should easily hold eight chickens. Hopefully the laundry basin will making cleaning underneath a bit easier. The nasty blue wall is concrete board covered in gorilla glue which was behind the shower enclosure.

To transition the chicks to their new space, we brought out their familiar motorola box and kept both their food and water inside. We have removed the screen lid and you can see that they are checking out their new digs, although hesitantly. We have added a second roost structure that they use to hop in and out of the box. 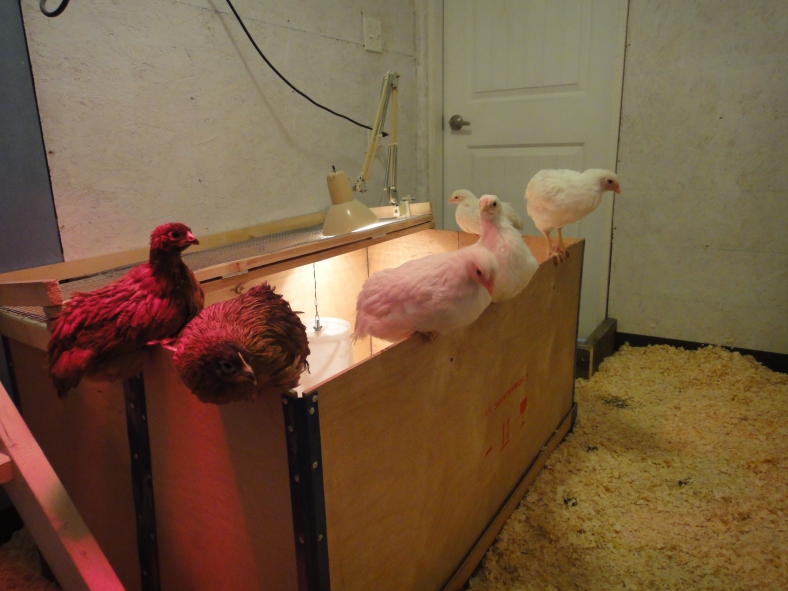 Here they are in order around the box – Chip, Peeps, Croque, TweedleDee, Roo (standing), TweedleDum

2 thoughts on “Recipe for a Hen House”