Once upon a time, FM and I lived in a big city far, far away called Delta, BC. Our castle was a beautiful place in a convenient location with easy access to highways, shopping and reputed schools.

Our Home; Our Castle

When we first acquired this castle, we could see that he had good bones but the sponge-painted walls and thick shag carpet gave a window to the neglect he had endured through the previous inhabitants.

The Castle before we updated all the windows, doors, roof and exterior colour

Not afraid of dust nor hard work, during our first year, FM and I took on the challenge of repainting his entire interior, putting in birch hardwood floors and swapping out old appliances for modern ones with new-fangled gizmos.

We installed the birch hardwood floors, pellet stove and stone hearth and had the maple mantel custom-designed 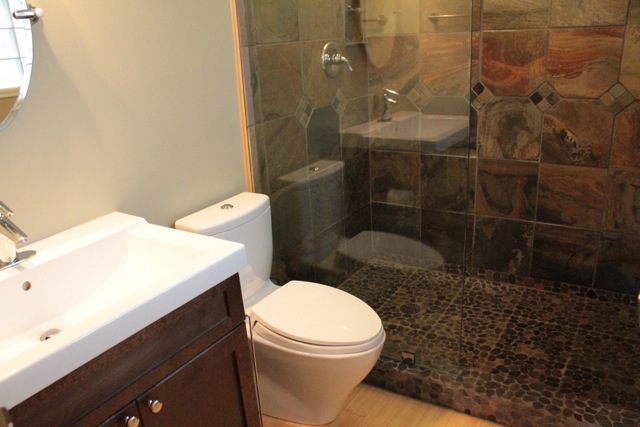 We gutted this bathroom, put in all new fixtures, custom-tiled the shower and added a glass wall

This type of modernification carried on for the entire 9 year span that we were keepers of the castle. From new bathroom fixtures to a redesigned kitchen, from a new 50 year roof to a new exterior paint scheme, from an English Country garden to productive raised veggie beds, we did it all – with minimal help from professionals. The castle had entered the 21st Century with all the bells and whistles and he truly shone. 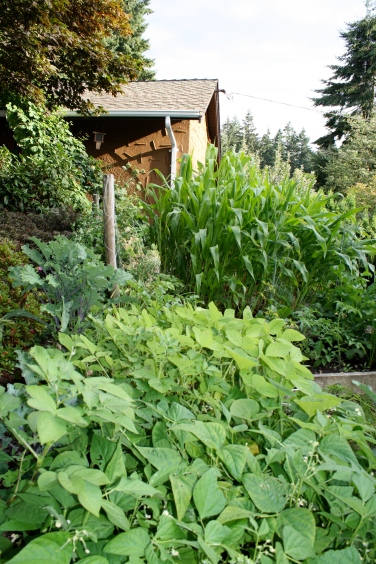 But, about a year ago, FM and I got the itch and we decided that city living was not meeting our dreams. Despite our love of the castle, we could no longer suppress our need for space, quiet and endless puttering. Sooner than you can say “You better think this through a bit more thoroughly”, we jumped ship and headed off to the Queendom, in search of a simpler, quieter life on a remote island.

But what about the castle, you ask.

Sadly, he was left behind. He was left decorated with a ‘for sale’ sign out front and nothing more. His halls were bare, his appliances turned off and his gardens left fallow. He patiently awaited new keepers but none came. A few slightly interested folk came to admire his perennial gardens and his updates, and a few even proposed tearing him down to build a more modern mansion, but no one fell in love with him enough to make an offer. Months went by. Spring became summer, summer turned to fall and finally winter set in.

Don’t think for a minute that FM and I abandoned the castle during this long period. The truth is that we visited regularly, about once each month, to upkeep the gardens, polish the doorknobs and sweep up after the potential new residents. We even reglazed a bathtub, repainted the interior in a (boring) neutral tone and had staging furniture brought in for a few months. But our efforts made no difference to the fate of the castle.

Surprising as this may seem, FM and I do not have endless riches, even though we lived in a castle and now reside at the Queendom. The costs of holding the castle in limbo were weighing heavily upon us and causing each of us to spend long nights walking the halls in search of enlightenment. Finally we decided that the real estate market had plateaued to such a degree that we would be fools of the court to continue waiting for someone to pay our asking price. It was time to take action and the action to take was to find tenants for the castle.

But the action of renting can be a scary thing. I witnessed my parents struggle as landlords of a quadraplex at Whistler. I still have vivid memories of my dad coming home from a long day at work and heading straight out the door again to drive two hours to the cabin to deal with a clogged toilet or some such nonsense. I was raised on fearful stories of rental houses being turned into brothels and landowners being unable to evict the tenants. But our lack of endless riches forced me to downplay these stories and embrace the idea of bills being paid and cheques coming in.

On New Year’s Day, the ‘for sale’ sign was taken down and the ‘for rent’ listing was put up on craigslist. In no time at all, renters were lining up with references in hand, hoping to be the chosen ones – the stewards of the castle. Interviews were held and the selection made.

A hard-working, reliable, middle-aged couple with both a college-aged daughter and a mother-in-law were found to be the most worthy. Their obvious admiration for the finer details of the castle were noted and their references seemingly glowed. They wished to be deemed stewards for at least three years and even made mention that they may possibly want to be full-fledged keepers of the castle at some point in the future. That is a story yet untold and much of that story will depend on the recovery of the lower mainland real estate market and our financial security.

Until then, FM and I can rest more easily with fewer late night walks in our halls, although I am sure they will still occur. The honour of being the keepers of the castle resides strongly with us and its obligations weigh heavily on us still, but the decision to find renters was the wisest choice in light of the options we were given.

6 thoughts on “The Tale of the Reluctant Landlords”