If you let nature alone for a while, it will erase all evidence of mankind. Books and movies have endlessly explored this fact but there is nothing quite like seeing it happen before your own eyes. We have only been tenants of the Queendom for a handful of months but we have begun to notice the ever-creeping, never-sleeping growth of nature.  It is enough to keep you awake at night for fear of being taken over by some strange moss or strangled by a vine (note the reference to ‘the lonesome death of jordy verrill’)

Here is the case in point.  The first photo was taken in April on the day we moved in. The second I took today from approximately the same spot.

April – grassy shoreline and clear view of the house.

October – treed shoreline and slightly obscured view of the house.

You may see a sunny spring day in the first or the range of colours that autumn brings in the second.  You may see that a tree has replaced pensive-looking FM as he surveys the Queendom – but I see ALDERS.  In six months, the alders have grown as if priming up for the London Olympics, as high as seven feet tall in places.  They surround the pond and have taken up residence in a few other  places. In the second photo, you can’t even see the kitchen door or the back porch!

They are called a pioneer species since they are the first tree to take hold after soil disruption. They are ‘nitrogen fixers’ meaning that they are able to create nitrogen and improve the soil for successive plants. Our pond was dug out less than two years ago so it is a prime example of disturbed soil that needs more nutrients. I knew all this in theory but it is truly something else to see them grow right before your eyes. 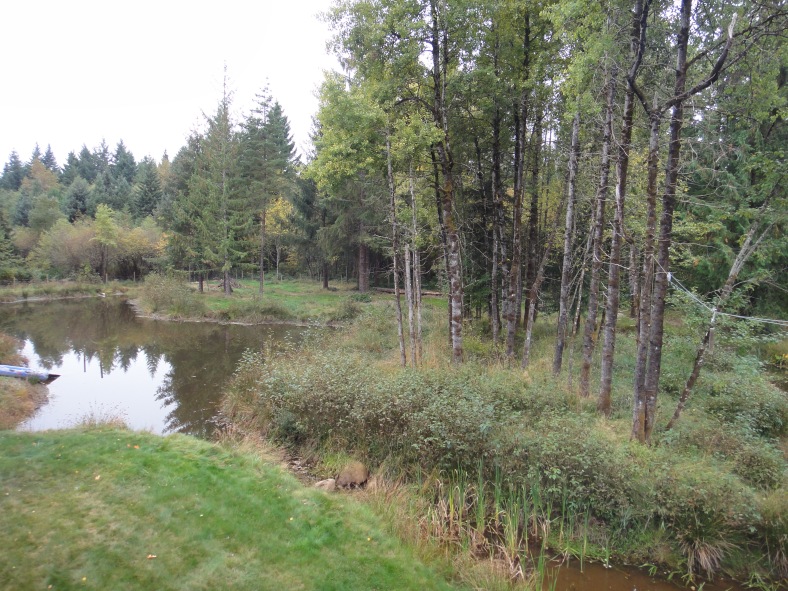 October – plenty o’ alders, all leafed out along the island’s edge

These two are taken from our bedroom balcony (yes – we  have a balcony off our bedroom! Shakespeare is fairly common place around here) The noteworthy thing about these photos is the LACK of alders on the near side of the pond. Guess why…

You’re right.  We have hand dug them all out. It is no easy task either. Firstly the soil is heavy on the clay content, making it like hardened cement all summer long. Also, alders tend to snap off right where the stem meets the roots, but the root will continue to grow new stems if the main one is broken off.

So with my favourite tool – the asymmetrical tree-planting staff – I have been diligently digging up the whole root system of each and every alder. So far I have made it around about 1/8th of the pond edge and that doesn’t include the worst offender – the island.